Beginning Feb. 18, there will be new leadership at the Seamen’s Church Institute of New York and New Jersey, which provides important programs and training to the inland barge industry.

Steering SCI’s course for the future will be the Rev. Mark Nestlehutt, who succeeds Rev. David Rider, who has been a familiar face at waterways conferences, seafarers centers, counseling sessions and barge blessings, and has played a pivotal role in expanding the Institute’s mission on the inland rivers during his 12-year tenure as executive director. Rider officially retires on March 1. 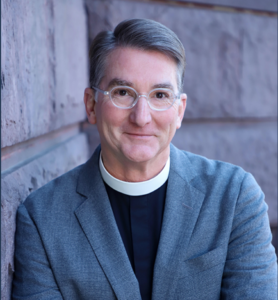 Nestlehutt brings more than 20 years of church experience in Massachusetts, Illinois, Maryland, Australia and South Africa. He most recently served the Washington Memorial Chapel in Valley Forge, PA as rector. He also served as an officer in the U.S. Navy and has held positrons in commercial banking and asset planning. He’s an avid sailor and spent 12 years as the rector of Christ Church in St. Michaels, Md., a waterfront community on the Chesapeake Bay where parishioners included river pilots, tugboat captains, ship engineers and students at the Calhoon MEBA Engineering School.

“In Mark we found the exactly the right person - very knowledgeable and passionate about mariners, and we felt that his work experiences were somehow all intended to prepare him for SCI,” said Craig Philip, search committee chair and former Ingram Barge CEO.

Nestlehutt is a native of Atlanta, and a graduate of University of George and Georgia State. He attended seminary at the Episcopal Divinity School in Cambridge, Mass. He has also served on the Board of Trustees of the Chesapeake Bay Maritime Museum.

“I look forward to building on the work of the Rev. David Rider, and working with the board and staff to address the emerging needs of mariners,” Nestlehutt said in a statement from the SCI.

Founded in 1834 and affiliated with the Episcopal Church, the Seamen’s Church is headquartered in New York City and is the largest mariner’s agency in North America. It’s chaplains and volunteers visit more than 3,000 vessels in the Port of New York and New Jersey, as well as well as boats working along 2,200 miles of the inland waterway system.

The SCI has an active presence on the inland rivers, with recently modernized mariner simulation training centers in Paducah, Ky., and Houston. Through its Ministry on the Rivers and Gulf program, it provides 24/7 counseling, support and fellowship to those working on inland vessels or shoreside management in the Ohio and Mississippi River systems and the Gulf of Mexico, and has developed specialized programs to address the mental health of mariners and the stresses they face in their jobs. It also distributes gifts each year to mariners who work on the Christmas holiday.