The “Shearer” name is synonymous with the inland marine industry, from Ed Shearer’s contributions to the field of naval architecture, to the multigenerational family owned barge line before him. O.F. Shearer & Sons barge line moved coal on the rivers from the 1920’s until 1973 when it was bought out by one of its largest customers. Ed’s dad, Capt. Bert, was well known and well respected on the rivers, and Ed spent much of his childhood working with, and learning from, his dad. 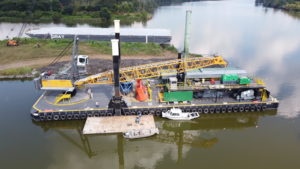 Shearer & Associates, Inc. was established by Ed in 1986 and started out as a small marine consulting company. By 1989, a project office was opened in Nashville to supply services to clients in the area. In 1992, a project office was opened in Louisville, KY to supply surveying and inspection services as well as onsite owner representation to the inland industry. By 2005, Shearer & Associates, Inc. had three project offices located in Houston, Nashville, and Louisville and a corporate office in New Orleans.

In 2010, the assets of Shearer & Associates, Inc. was purchased by Gregory Beers, P.E. and Cory Wood of Bristol Harbor Group, Inc. Because of the transfer in ownership from Shearer & Associates, Inc. to The Shearer Group, Inc. (TSGI), Mr. Shearer decided to downsize from four locations to two. Ed continues to work at TSGI as a Principal Naval Architect and carries on his 50 plus years of knowledge in the industry to TSGI’s younger engineers.

TSGI focuses on the inland sector which requires unique skills and knowledge of its engineers. The inland sector is comprised of many diverse, smaller companies. The inland marine market encompasses more than 15,000 U.S. flagged vessels (barges, towboats, ferries, marine construction equipment, etc.), so each design has its own set of unique challenges and requirements. Design and engineering support projects tend to be shorter in duration and are scheduled with typically less lead time. Maintaining sufficient flexibility in TSGI’s project scheduling allows for known projects to be accomplished as well as the “known unknown” projects. TSGI specializes in custom designs to meet any unique challenge an operator may need to overcome.

Growth of The Shearer Group, Inc.

Since 2010, TSGI has grown immensely. TSGI’s engineering manager, Joshua Sebastian, P.E., had previously worked at BHGI prior to being promoted to engineering manager at TSGI. Josh graduated from the U.S. Coast Guard Academy with a degree in naval architecture and marine engineering. He has done an excellent job steering TSGI towards growth ever since. In addition to his extensive engineering background, he has a strong interest in business development. This has allowed TSGI to retain additional employees and a growing diverse clientele that includes operators, shipyard and government entities.

During the past year, TSGI has completed the designs of multiple dump scows, dredge barges, and dry docks.

SCF recently engaged TSGI to develop a dual-fuel LNG/Diesel Z-Drive conversion package for two of their existing vessels that are operating on the lower Mississippi River. TSGI built off its experience (and that of BHGI) to work with USCG to develop guidelines based on the IGF Code with considerations provided for inland towboats and the current state of NG fumigation technology.

In 2017, TSGI won a contract with the Texas Department of Transportation (TxDOT) for the design, engineering, and construction oversight of a 500 passenger / 70 car double-ended diesel-electric passenger vessel. TSGI’s design incorporates a diesel-electric propulsion system with 1.4MWhr of energy storage. The vessel is currently under construction and TSGI continues to support TxDOT by providing construction oversight services. The ferry is expected to be delivered in 2021 and will have the largest energy storage capacity of any U.S. flagged ferry in operation.

TSGI recently designed a 23,000 BBL tank barge built by Southwest Shipyard, L.P. in Houston, TX. It was a custom design that did not fall into TSGI’s typical inland tank barge design. The vessel had very strict draft and capacity requirements to enable it to function in the areas required while delivering the necessary amount of jet fuel. The barge has a unique manifold and recirculation system installed, along with a climate-controlled operators station. Additionally, the trunk top height had to be minimized while at the same time the length, breadth, and operating draft were restricted by local conditions.

Where TSGI Is Going

TSGI has been on the cutting edge of applying marine technology to the inland marine industry by being a leader in implementing diesel-electric propulsion, energy storage, and LNG as a fuel, while also applying the latest in engineering technology such as FEA and Computational Fluid Dynamics (CFD) analysis. TSGI has a strong backlog of barge design work which continues to expand. TSGI and its talented staff continues to grow and evolve, and looks forward to tackling the challenges that the next decade is sure to bring. This year TSGI just celebrated 10 years of business!