A Florida boater clung to the bow pulpit of his submerged powerboat for two days before he was rescued by a cargo vessel 86 miles east of  Port Canaveral, Fla., according to the Coast Guard.

Stuart Bee, 63, headed out from Cape Marina in Port Canaveral Nov. 27 and never returned, prompting a marina employee to contact watchstanders at Coast Guard Sector Jacksonville at 11:40 a.m. the next day because Bee typically did not stay out overnight on his 34-foot Sea Ray powerboat, Coast Guard officials said. 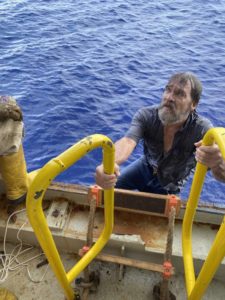 A C-130 Hercules aircrew took off from Coast Guard Air Station Clearwater to search, joined by a Customs and Border Patrol aircraft, and the Coast Guard began broadcasting advisories to mariners to keep a lookout for the vessel.

Around 10 a.m. Sunday the crew of the Angeles, a 738’x102’, 2,750 TEU Liberian-flagged container ship enroute from Honduras to Wilmington, Del., spotted Bee waving as he hung onto the anchor pulpit of his boat, almost totally submerged stern-down. The vessel maneuvered over and successfully got Bee aboard by 11 a.m.

The Angeles crew told Coast Guard officials Bee was safe and had no medical concerns. Bee remained on board the Angeles for the rest of its voyage and was to be picked up by a family member after the ship's arrival at the Port of Wilmington Tuesday.

“The chances of finding Bee alive were slim,” said Lt. Shawn Antonelli, a command duty officer at the Coast Guard District Seven headquarters in Miami. “But he was able to stay with his boat, which helped save his life.”