The fireboat market has been surging over the last year, with eight North American fireboat builders filling orders for a variety of domestic and international customers.

The reason, according to several manufacturers, is that smaller communities, many with the help of federal port security grants as well as increased state and municipal funding, are ordering purpose-built fireboats for the first time. In addition, repeat customers in need of larger vessels have spurred design innovations at builders such as MetalCraft Marine in Kingston, Ontario, Canada. 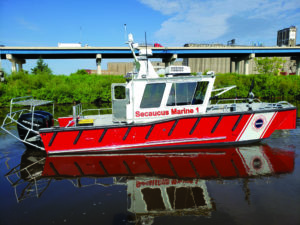 “There has been steady interest from smaller communities because first responders are responsible for safety on the water, and they need multi-mission boats with fire-response capability,” explained Chad DeMars, vice president of operations at Lake Assault Boats, Superior, Wis., a part of Fraser Shipyards Inc.

Previously, DeMars said, many of these local fire departments struggled to get by with recreational boats equipped with firefighting pumps, but the boats were overburdened by the weight of the added gear. Once money became available these communities opted to find more capable craft.

Most in demand are high-speed, nimble, easy-to-operate multipurpose vessels in the 22’-to-40’ range that can be used to fight fires and perform patrol, search-and-rescue, diving and law enforcement missions. “Landing-craft style boats have gained a lot of popularity,” said David Hunt, project manager for Silver Ships, Mobile, Ala.

Jesse Munson, vice president of Munson Boats, Burlington, Wash., noted a trend toward outboard motors, even in larger craft. “Ten years ago,” he said, “bigger boats would have had inboards, but they are now being purchased with triple and quad outboards. The upfront costs are less, and maintenance is simpler. Fire departments want more speed and more performance, and outboards do the job.”

Secaucus, N.J., is a case in point. The town of 16,000 on the Hackensack River seven miles west of New York City is part of a NY/NJ regional marine firefighting task force responsible for New York Harbor, the Hudson River, the commercial ports in Newark Bay and adjacent waterways. In August Secaucus took delivery of new a 28’x10’ fireboat from Lake Assault. Before that, the all-volunteer fire department patrolled and fought fires with a 17’ Boston Whaler fitted with a fire pump, and three 14’ skiffs used for rescue work.

Fire chief Carl Leppin had wanted a better-equipped boat for a long time. “I applied for a grant three times, and this time we were successful,” he said. A federal port security grant provided 75% of the funding for the $425,000 monohull, with Secaucus paying the rest.

“I am a boat guy,” Leppin said, “and this is an unbelievable piece of equipment.” The landing-craft style trailer boat has a CBRNE (chemical, biological, radiological, nuclear and explosive) pressurized cabin system to protect the crew in hazardous areas. The hull has 32” draft, with a hydraulically powered drop-down bow door and a port side dive door. Twin 350-hp Mercury Verado outboards propel the boat at up to 50 mph while a marinized 356-hp V-8 powers the Darley fire pump, which supplies two Task Force Tips (TFT) bow monitors — one rated at 1,500 gpm, the other at 500 gpm. There is also a large-diameter manifold on the bow deck to supply land-based fire apparatus.

Lake Assault, which, DuMars said, has built 111 fireboats since 2010, is also constructing a 32’ aluminum landing craft catamaran with fire, patrol and EMS capabilities for the Pittsburgh Water Rescue Group, and they just shipped a 28’x10’ monohull fireboat to Ho Chi Min City in Vietnam, their first fireboat for a foreign market.

Frank Simpson, chief of marine operations for the New York City Fire Department (FDNY), was pleased to learn that the Secaucus boat would be a new regional asset. “The more help you have on the water, the better,” he said.

FDNY added three new 33’ fireboats in August, built by Safe Boats International, Bremerton, Wash. Funded partially by federal grants, the boats have aluminum hulls, foam collars, full cabins, and are powered by three 300-hp Yamaha outboards that provide speeds of up to 43 knots. Darley fire pumps, rated at 1,000 gpm each, feed deck monitors. The boats are similar to other in the FDNY fleet, which has 20-plus Safe boats in the 31’ to 35’ range, in addition to four much larger vessels.

“We like these boats because they have proven records and are fast, agile and powerful with the shallow draft we need in some areas,” Simpson said. The new boats will be used for seasonal patrols in Brooklyn, Staten Island and Queens.

“We’ve been building fireboats for New York City for a long time,” said James Babcock, director of U.S. and FMS (Foreign Military Sales) programs at Safe Boats. “They fight fires, assist people in the water and pull people off of planes that land in the Hudson River. If you look at the old pictures,” he said, referring to the “Miracle on the Hudson” flight that made an emergency landing on the river in 2009, “you’ll see that three or four of the assisting boats are ours.”

Safe has built a variety of fireboats for communities from Massachusetts to California and is currently building a multipurpose boat with firefighting capability for the Westchester County, N.Y., sheriff’s office. 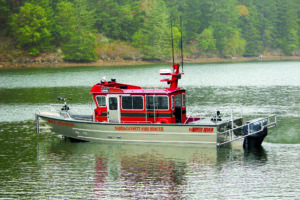 North River Boats, Roseburg, Ore., displayed the 31’x10’ fireboat they built for Narragansett, R.I., at the 2018 International WorkBoat Show in December, and delivered it two weeks later. “The boat was so well-received that we immediately started getting requests from other agencies,” director of sales Mike Blocher reported. The company is now building similar boats for Bristol, R.I., and Baytown, Texas.

Twin 250-hp Yamaha outboards propel the aluminum deep-vee hull Narragansett boat at better than 40 mph. The boat, which is used for rescues, medical transport and firefighting, has a 10’ walkaround cabin, a 36”-wide folding bow door, a dive door, a Darley 500-gpm engine-mounted fire pump, bow and stern TFT monitors and a suite of Raymarine electronics.

The new Lake of the Ozarks fireboat, built by Silver Ships, Mobile, Ala., has been busy since its delivery last November. With nooks, crannies and rugged terrain, the Missouri lake boasts more shoreline than the coast of California, which makes firefighting a challenge from both land and water.

According to project manager David Hunt, the new 34’x12’ welded aluminum Silver Ships Endeavor 34 monohull was tapped to assist with condo and marina fires soon after it was launched, using its deck monitors to wet down surfaces it could reach from the water and its large diameter hose discharge to supply lake water to land-based fire trucks. The boat is powered by three 350-hp Mercury Verado outboards. A Hale fire pump with a GM Duramax diesel engine feeds an electric remote monitor on the cabin top. 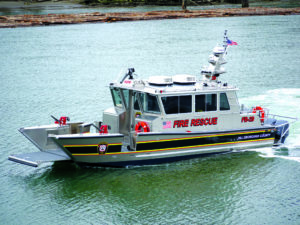 Munson Boats has been building fireboats in the 26’ to 38’ range for several years, usually one or two a year, according to Jesse Munson. “Most of the orders we’ve been getting have been for multipurpose rescue boats with added firefighting equipment.” Many, he said, have been small, trailerable boats. But last year the company delivered one of its larger boats, a 38’x13’ catamaran, to Hillsborough County Fire Rescue for use in Tampa Bay, one of Florida’s busiest commercial ports. The boat, which was funded in part by a port security grant, provides CBRNE detection, EMS and firefighting services to the area’s waterways. Four 250-hp Yamaha outboards propel the landing-craft style aluminum hull at speeds up to 47 mph. The boat features joystick steering, and a Duramax diesel/Hale fire pump rated at 3,000 gpm that feeds a TFT roof monitor and two Akron Brass bow monitors.

The San Francisco M2-38 catamaran, which was funded in part by a FEMA port security grant, will be used primarily as a dive and rescue boat. Twin Cummins 425-hp turbo diesels with HamiltonJet waterjets produce speeds up to 35 knots. The boat is equipped with a Hale fire pump, rated at 1,500 gpm, radiation detection equipment and CBRN positive pressure cabin air filtration and an extensive electronics suite.

The Rochester boat, an M2-38 cat slated for delivery in fall 2020, will also have Cummins diesels, HamiltonJet waterjets and a fire-pump system flowing in excess of 1,500 gpm. Cockpit mounted monitors and a hose discharge portal for connection to fire trucks will allow firefighting from the water and from land The boat will have a walkaround cabin with EMS equipment and a patient bench.

The larger M1-46 fire-rescue catamaran that Moose is building for use in Chesapeake Bay will have bigger engines and more powerful pumps. Twin Cummins 600-hp diesels coupled with waterjets will provide the power and a Hale fire pump will push water out of TFT monitors at 2,500 gpm. It will also have a large volume discharge for supplying water to land-based fire apparatus. Delivery is expected in January 2020.

MetalCraft, which is currently building its 112th fireboat, has a thriving business in small and medium-size fireboats with several now in use or on order in New York state, Connecticut, Florida and South Carolina. But the company is most excited about two innovative vessels, both bound for Kuwait.

The first, a FireStorm 50, now aboard a ship headed to the Kuwait Fire Service Directorate, is the first fireboat in the world built with Marine Jet Power (MJP) 310X jets, according to MetalCraft. “We saw unbelievable results during sea trials,” said Bob Clark, the company’s contracts manager. “We got four knots more speed with those jets,” bringing the speed to 44.5 knots. Two other boats with MJP jets are now on order, Clark said. Kuwait’s 50’x15.6’ aluminum boat has twin Volvo Penta D13 1,000 hp engines, Raymarine electronics and Darley fire pumps capable of producing 7,500 gpm at 150 psi through Elkhart Brass monitors on the bow and cabin top.

MetalCraft will begin production this fall on a new FireCat 80 for Kuwait that will use “groundbreaking design technology and be the first fireboat of its kind in the world,” according to Clark. The company partnered with the UK’s Walker Design to acquire rights to use its proven North Sea hull design. The semi-displacement hull will have speed of 27 knots and the ability to pump 11,000 gpm from two telescopic towers up to 45’ above the water. “No other fireboat has towers this tall,” Clark said. MetalCraft is working with Norway’s Jason Engineering on the design of the towers and all firefighting equipment.

Metal Shark, Jeanerette, La., is building a 50 Defiant X fireboat to replace an older vessel operated by the Miami-Dade Fire Rescue Department. The 50’x15′ vessel will be powered by twin inboard diesels mated to a pair of waterjets. Top speed is expected to be 45 knots.