In late 2019, Portland Spirit Cruises & Events was on track to have either its best year in 25 years or its second best. And sales for 2020 “are off to an excellent start,” Dan Yates, president of the Oregon dining and sightseeing cruise company, said late last year.

Even though the region is trade dependent on the Pacific Rim, the economy is holding up well. Unemployment and interest rates are low. Both the corporate and public sides of the business have been strong. His biggest challenge — and one echoed by other operators — is finding employees, especially ones who show up for work on time.

Yates also is introducing a new route this year with the Seven Wonders of the Gorge sightseeing cruise out of the Port of Camas/Washougal, Wash., on the Columbia River east of Portland. He’ll use the 84’x24’x4.5′, four-deck aluminum Crystal Dolphin for the “15- to 20-mile run we don’t normally cover.” He figures it will take two or three years to develop the market, “but we’re excited about the opportunity.”

Yates isn’t the only one who finds opportunity in one of the strongest segments of the workboat business. The past year has seen major acquisitions by operators such as Hornblower Holdings, the growing popularity of the Great Lakes, and newbuilds for the leisure and ferry markets.

The industry’s also dealing with the aftermath of two major fatalities in the last two years and anticipating tougher inspections and possibly new regulations for some sectors. Several federal agencies are investigating the September California dive boat fire that killed 33 passengers and one crew, including the Coast Guard, which has convened a rare Marine Board of Investigation MBI. The second MBI in two years follows an earlier one looking into a duck boat sinking that killed 17 people near Branson, Mo., in 2018.

Overall, the healthy economy has meant “operators from all passenger vessel industry market segments have reported strong 2019 seasons,” said John Groundwater, executive director of the Passenger Vessel Association (PVA). “While there has been consolidation at the top of the industry, passenger vessel operators of all sizes have also reported adding vessels to their fleets as well as upgrading facilities.”

PVA’s own membership has also grown. As of December, it had added 48 new companies — an approximate 25% increase over 2018, he said.

One company that significantly expanded its portfolio last year was Hornblower with the purchase of Entertainment Cruises, the addition of Boston Harbor Cruises as well as a second Canadian operator, and the October acquisition of London-based City Cruises, the largest tour operator on the River Thames. Companies also under the Hornblower umbrella include Hornblower Cruises & Events, New York City’s NYC Ferry, HMS Global Maritime and overnight brands American Queen Steamboat Co. and Victory Cruise Lines.

Entertainment Cruises, with 53 dining and sightseeing vessels, broadens Hornblower’s national reach from the West Coast to a larger chunk of the Northeast and Chicago.

“We’ve always been interested in growing. We’ve made a number of acquisitions along the way,” said Terry MacRae, chairman and CEO of Hornblower. They recently added a significant private equity investor, Crestview Partners, which, along with MacRae and American Queen chairman and CEO John Waggoner, own Hornblower Holdings.

They operate over a wide range of products, services and geographies. “Our goal is to grow all of our different segments,” MacRae said. And they’re looking for other related segments, like waterfront venues where “we can bring a boat into play.”

“Both consumer and business sentiment are holding up well,” MacRae said. Hornblower expected to carry more than 30 million passengers last year. “The U.S. is still the healthiest place in the world to invest your money.”

American Queen is part of an overnight cruise market that keeps growing with new and refurbished vessels and new itineraries.

American Cruise Lines expects its American Jazz to start cruising the Mississippi the third quarter of this year. The 194-passenger vessel is the third in the Guilford, Conn., company’s series of five new riverboats built by Chesapeake Shipbuilding, Salisbury, Md., which shares ownership with the line. ACL also is adding trips between Nashville, Tenn., and Memphis, Tenn.

American Queen’s 245-passenger American Countess is due to begin sailing in April, the fourth boat in the riverboat line’s fleet of renovated and reconstructed vessels. Itineraries include a 15-day trip from Minnesota to New Orleans. Work on the vessel at Gulf Island Shipyards, Houma, La., included the addition of a 60′ midbody to what was once the 257’x78’x14′ casino boat Kanesville Queen.

American Queen’s sister brand, Victory Cruise Lines, includes the Bahamas-flagged Victory I and Victory II – 300’x50’x13′, 202-passenger vessels originally named the Cape Cod Light and Cape May Light, built by Atlantic Marine in Jacksonville, Fla., in 2001. The acquisition expands its reach to the Great Lakes and beyond. 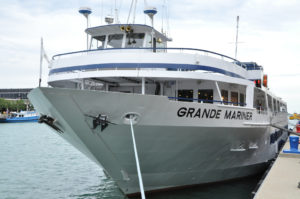 Blount Small Ship Adventures 184′ Grande Mariner and sistership Grande Caribe will both be retrofitted in the fall of 2020. David Krapf photo

The Great Lakes are an increasingly popular destination especially for overnight cruises on smaller ships that carry up to 400 passengers.

“We’re getting calls from many expedition shipowners looking to place their ships in the Great Lakes,” said Stephen Burnett, executive director of the Great Lakes Cruising Coalition Inc., based in Kingston, Ontario. “There’s a lot of unrest in many areas, and a lot of clients and shipowners don’t want to be there. The Great Lakes is probably the safest place in the world.”

In 2019, eight ships with 15,000 berths visited the Great Lakes. In 2020 Burnett expects eight ships with 16,500 berths and an additional four ships over the next five years. That’s up from 2014 when a handful of vessels, including Warren, R.I.-based Blount Small Ship Adventures, accounted for 11,000 berths. Ports on both sides of the border have freshened up their facilities, he said.

Blount has been cruising the Great Lakes since the ‘80s, said president Nancy Blount. Their most popular itinerary is the 16-day New York to Chicago trip that sails four of the five lakes and the Erie Canal — the latter possible thanks to a patented retractable pilothouse. A couple of those trips already are sold out for 2020.

“Domestic cruising is really doing well,” said Blount, who’s looking forward to a strong year for her vessels that also sail other East Coast itineraries and the Bahamas.

The 184’x40’x6’6″ Grande Caribe and Grande Mariner will both be retrofitted in the fall of 2020, and then Blount plans to add a newbuild to its fleet.

Newbuilds have figured into the optimistic outlook of two other operators — one on the East Coast and one on the Gulf. 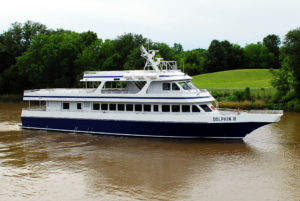 While his other boats still look like new, a new boat “is something I always wanted to do,” said owner Capt. Steve Milliken, who’s very impressed with the Tier 4 engines. Among other pluses is no exhaust smell, and it shows the general public they’re trying to be a cleaner company. The largest in his fleet of four, the Dolphin XI replaces another boat that was snapped up quickly by a New York operator.

“The boat is phenomenal,” he said. “It’s got the power we need when we need it. The engines run smooth. It’s quiet onboard.”

Farther south, Capt. Harry Julian, president of Pure Florida, a tour and charter boat operator in Naples and Fort Myers, Fla., in recent years has dealt with a menacing red tide that can cause respiratory problems in humans and kill sea life. But that’s less of an issue now, so 2019 was “way better” than 2018, “and next year should be even better,” he said, thanks to a new vessel and robust economy.

“The boat has more range, speed and capability to get to where the big fish are,” said Julian, whose 15 boats range from six to 149 passengers.

The riverboat Louis Armstrong was expected to have started service in December with dockside events, said Warren Reuther Jr., president of Hospitality Enterprises, which also operates the paddlewheeler Creole Queen. They also plan to sail under charter. The 310’x70’x14′ former City of Evansville has a capacity of 3,000.

New Orleans Steamboat Co. expected to have the sternwheeler City of New Orleans in service in January, joining the Natchez on the Mississippi for dinner and sightseeing cruises, said Matt Dow, assistant marine operations manager. The 189’x55′ former Casino Rock Island can hold 1,000 and the Natchez 1,200.

“It was a pretty decent year,” Dow said of 2019. “We were very lucky not to have too many tropical disturbances.” But they did have to deal with high water on the Mississippi, which the Natchez handled well. He’s looking forward to an even better 2020, especially with a lot of conventions coming to town.