The pair of 6-megawatt Siemens Gamesa will be assembled by Dominion Energy and wind developer Ørsted for the Coastal Virginia Offshore Wind (CVOW), a pilot project 27 miles offshore for what is planned to become a much larger array on a federal lease east of Virginia Beach.

The foundations, consisting of the turbines’ monopiles, transition pieces and anode cages fabricated by metals manufacturer EEW SPC, were loaded at Rostock, Germany onto the Bigroll Beaufort, a Netherlands-flagged 568’x138’, 20,157 dwt flat deck cargo ship. Turbine components were loaded at Esbjerg, Denmark, before the vessel embarked in mid-April. Arrival is expected around April 25 in Halifax, according to commercial vessel tracking services. 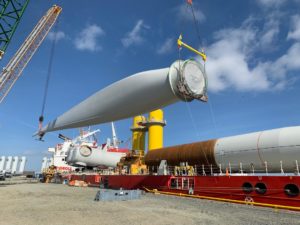 Turbine components were loaded at the Danish port of Esbjerg for the two-week transit to North America. Dominion Energy photo.

“This is a monumental step toward the installation of the first offshore wind turbines in federal waters, which will deliver clean, renewable energy to our customers,” said Mark D. Mitchell, Dominion Energy’s vice president of generation construction, in announcing the Bigroll Beaufort had sailed. “The construction of these two turbines will help us reach our goal for net zero emissions and position Virginia as a leader in offshore wind.”

Meanwhile, Dominion Energy is conducting ocean surveys to map the seabed of the larger 112,800-acre lease area where the company’s 2,600 MW array is to be built, beginning in 2024. The surveys will inform the company’s environmental impact assessments and developing its construction and operations plan that will be submitted to BOEM later this year.

As that equipment crossed the Atlantic, New Jersey economic development planners announced the start-up plan for the state’s new Wind Innovation and New Development (WIND) Institute, a long-term initiative to coordinate offshore wind workforce development and research and development in the Garden State.

Gov. Phil Murphy’s Wind Council, a state task force set up in August 2019, issued its report April 22 with detailed recommendations and objectives for building the state’s opportunity to lead in developing the nascent industry. It calls for the WIND Institute to be an independent state authority, with an allied nonprofit group.

The goals include involving all stakeholders, including the New Jersey commercial and recreational fishing industry – with its annual economic impact of $8 billion as estimated in 2018 – along with labor, manufacturers and university and science groups.

The council took a close look at what New Jersey needs to be a player, including a “gap analysis” of the workforce and skills available there for wind developers, said Brian Sabina, a senior vice president with the state Economic Development Authority.

Sabina and Jane Cohen, a senior policy advisor to the governor’s office, presented the plan Wednesday during the IPF20 Virtual online offshore wind conference hosted by the Business Network for Offshore Wind.

“We realize it’s going to take some time to stand up the WIND Institute as we have envisioned it,” said Cohen. But plans are underway for a workforce development working group, a request for proposals to devise a Global Wind Organization certification program for offshore wind power workers, and industry-sponsored “innovation challenges” to develop technology, she said.

The plan includes finding a physical location and hiring some staff for the institute, and issuing a strategic plan in the coming months, said Cohen and Sabina.

New Jersey and New York have the most ambitious goals for offshore power of any states, with policies calling for up to 16.5 gigawatts potential generation, or about half of what’s being proposed in U.S. Atlantic waters.

While there is some competition between the states for attracting developers and the economic growth potential they bring, the neighbors will need to work together, said Cohen: “New York can’t do it without New Jersey, and vice versa.”