The EnBW Group, a German utility company and offshore wind developer, is preparing to bid on an anticipated next round of federal energy leases in the New York Bight, and joined a partnership with commercial fishing advocates.

It is another sign of mounting interest in the energy-hungry urban region, where New York state officials on Wednesday announced finalized contracts with Equinor Wind US for its 816-megawatt Empire Wind project near the New York Harbor approaches, and the Sunrise Wind 880-MW project that Ørsted and Eversource Energy plan for a federal lease east of Long Island.

But the backdrop to all this includes the U.S. Bureau of Offshore Energy Management’s decision to take a deeper dive into reviewing the potential cumulative impacts of wind energy on other maritime uses – particularly commercial fishing, shipping and environmental impacts.

EnBW says it is trying to reach out to the fishing industry early with its hire of Beth Casoni, executive director of the Massachusetts Lobstermen’s Association, as its fisheries liaison.

Casoni is well known in the Northeast fishing industry, where she has served on the Atlantic Large Whale Take Reduction Team, seafood marketing boards, and herring advisory panels to the New England Fishery Management Council and the Atlantic States Marine Fisheries Commission.

Her job is to get fishermen’s input “on offshore wind related issues and developments and conveying to them timely information about EnBW North America’s offshore wind planning and future on-water activities,” according to a statement from the company. “Among other duties, Casoni will inform and develop best management practices and strategies that support the coexistence off offshore wind and fishing.” 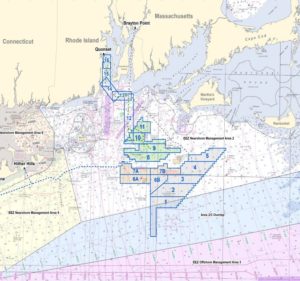 In the statement, Casoni said she met White when he was co-chairman “the Massachusetts Fisheries Working Group on Offshore Wind and know first-hand his respect for the fishing industry. I look forward to engaging with the fishing industry and guiding EnBW North America forward in this vital role.”

EnBW is now the first wind developer to join the Responsible Offshore Development Alliance even before obtaining its first U.S. lease. RODA former as a coalition of commercial fishing and seafood groups, and this year entered partnership with several wind developers to address issues including potential conflicts between the industries, more effective communication and cooperative research.

The new agreement between EnBW North America and RODA “acknowledges a range of interests shared by the two parties, including identifying site-specific design, construction and operations strategies for offshore wind development in order to minimize fisheries impacts; utilizing science-based decision making; and ensuring that interests of the fishing community at-large are represented during the planning, construction and operations of offshore wind energy facilities,” according to the company.

Its German parent company built that nation’s first offshore wind array in 2011, the 48-MW Baltic 1 project, and is currently building the 610-MW Hohe See and Albatros wind projects in the North Sea. EnBW say its working toward a 900-MW North Sea project that can compete on the energy market without public subsidies – a goal that offshore wind developers must achieve for their long-term viability in the U.S. market as well.

EnBW competed in December 2018 through the last round of bidding on three leases that BOEM offered off Massachusetts. In spring 2019 the company established offices in Boston and Jersey City, N.J., with an eye to future lease offerings.

The successful Massachusetts bidders Ørsted and Eversource are conducting survey work in their planned Bay State Wind, Revolution Wind and Sunrise Wind leases and on future power cable routes. Ørsted is issuing notices to mariners about the work, but the Long Island Commercial Fishing Association this week called for New York state to require “a monitoring/mitigation plan that includes compensation for the entire project, including surveys, just like Rhode Island.”

Ørsted foresees starting soon too on its biggest proposal to date, the 1,100-MW Ocean Wind project off Atlantic City. That array should be up and running in 2024, said Clint Plummer, Ørsted’s U.S. head of market strategies and new projects, speaking Tuesday at an ocean policy symposium at Monmouth University in West Long Branch, N.J.

A day later, New York officials were touting their financial planning and incentives to help establish the offshore wind industry, with a trend toward declining power costs over time.

“These projects are priced competitively relative to recent results from New Jersey and several New England states, while also delivering significant new port infrastructure investments, public-private workforce training commitments and thousands of well-paying job opportunities,” according to a statement from the New York state Energy Research and Development Authority. “The average bill impact for residential customers will be less than a dollar per month per customer — approximately $0.73,” the agency says.