Valiant increased Coast Guard presence along the northern coasts of Haiti, Dominican Republic, Cuba, and the Windward Passage, working to prevent an anticipated surge of illegal immigration and human smuggling amidst the Covid-19 global pandemic. Throughout this patrol, Valiant served as the Cutter Tasking Unit, directing all Coast Guard assets supporting Operation Southeast Watch in the Windward Passage. In order to deter an illegal exodus from Haiti, Valiant maintained an overt presence by frequently transiting the Canal de la Tortue, a heavily trafficked, deepwater passage between the Tortuga Island and the Northern Haitian coastline. 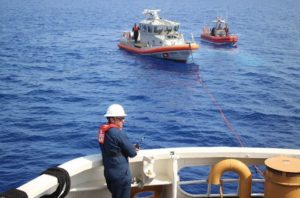 Early in the patrol, Valiant conducted vital training with two MH-65 Dolphin helicopters from Air Station Miami. The first evolution involved a vertical replenishment between the cutter and an airborne helicopter and aided in the qualification of Valiant‘s flight deck crew as well as two pilots for shipboard operations in preparation for hurricane season. The second evolution included multiple day and night touch and go’s, as well as a helicopter in-flight refueling, ultimately leading to the qualification of numerous crewmembers.

Valiant unloaded nearly 14,000 lbs. of cocaine and marijuana and nine detained suspected drug smugglers during the patrol. The contraband and detainees were seized by multiple Coast Guard and Navy assets and transferred to other Coast Guard cutters for future disposition stateside.

“Valiant‘s crew has a unique ability to be at their best in the most challenging of times, and this patrol was no exception,” said Cmdr. Matthew Waldron, Valiant‘s commanding officer. “Demonstrating exceptional fortitude, they adapted and overcame all challenges associated with the worldwide pandemic to safely conduct a two-month patrol in the Windward Passage. Using overt presence to deter migrant departures from Haiti, we prevented attempts of dangerous and illegal maritime voyages to the Bahamas and Florida. The crew’s efforts proved highly effective, as migrant departures from Haiti were kept well below historic norms during this period, allowing first responders in the U.S. and the Bahamas to focus on pandemic response efforts.”