The Coast Guard presented a Public Service Award today to the crew of the 276-passenger Fireball, a 75’x18′ ferry owned and operated by Fire Island Ferries, Bay Shore, N.Y. 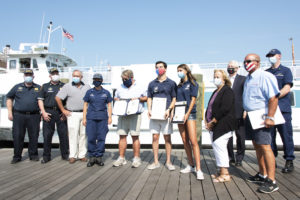 “I am honored to recognize the Fireball’s crew for stepping up and taking action without hesitation to save six lives,” said Capt. Van Camp. “The rescue is a testament to the professionalism and training of the Fire Island Ferries team of professional mariners. We rely on our network of port partners to ensure the continued safety and security of our waterways. This is just another example of why our partnerships in the maritime community are so vital.”

On July 26, the captain and crew of  the 75’x18′ Fireball noticed a vessel in distress, sitting low in the water along their route in the Great South Bay. As the Fireball approached, the vessel capsized, tossing all six persons aboard into the water. The Fireball crew acted quickly, maneuvering the vessel in high winds and dense vessel traffic, while rigging rescue equipment. Their actions resulted in the swift rescue of all six persons in the water and their safe transfer to a Coast Guard small boat.

The Certificate of Merit recognizes significant endeavors by individuals and groups that prove to be significantly beneficial to one or more of the Coast Guard’s missions and responsibilities as to warrant a tangible, public expression of appreciation.