The minimum ice extent is the second lowest in the 42-year-old satellite record, reinforcing the long-term downward trend in Arctic ice extent. Sea ice extent will now begin its seasonal increase through autumn and winter. In the Antarctic, sea ice extent is now well above average and within the range of the ten largest ice extents on record, underscoring its high year-to-year variability. The annual maximum for Antarctic sea ice typically occurs in late September or early October. (Please note that this is a preliminary announcement. Changing winds or late-season melt could still reduce the Arctic ice extent, as happened in 2005 and 2010. NSIDC scientists will release a full analysis of the Arctic melt season, and discuss the Antarctic winter sea ice growth, in early October.)

A sharp decline of Arctic sea ice at the beginning of September dropped the extent below 4.0 million square kilometers (1.54 million square miles) for only the second time since the beginning of the satellite record in 1979. After Sept. 8, daily melt began leveling out, reaching its seasonal minimum extent of 3.74 million square kilometers (1.44 million square miles) on Sept. 15. This appears to be the lowest extent of the year. In response to the setting sun and falling temperatures, ice extent will begin increasing through autumn and winter. However, a shift in wind patterns or a period of late season melt could still push the ice extent lower.

The 14 lowest extents in the satellite era have all occurred in the last 14 years. 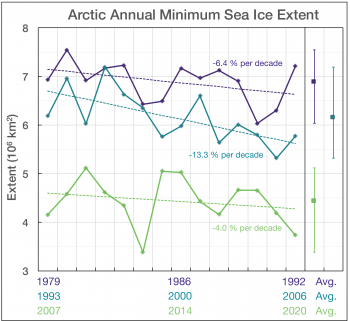 Figure 2b. This graph shows linear trends of Arctic sea ice extent for three 14-year periods for the day of the annual minimum. Trend percent values are relative to the 1981 to 2010 average minimum extent. On the right, the average (square) and range of highest and lowest extents at the minimum for each period are given.

This year’s minimum set on Sept. 15 was 350,000 square kilometers (135,000 square miles) above the record minimum extent in the satellite era, which occurred on September 17, 2012 (Figure 2a). It is also 2.51 million square kilometers (969,000 square miles) below the 1981 to 2010 average minimum extent, which is equivalent in size to roughly the states of Alaska, Texas, and Montana combined, or Greenland and Finland combined.

The overall, downward trend in the minimum extent from 1979 to 2020 is 13.4% per decade relative to the 1981 to 2010 average. NSIDC scientists provide Arctic Sea Ice News and Analysis, with partial support from NASA.