Thankfully, progress has put paid to a once-widespread belief in the maritime community that unbroken, high-speed offshore connectivity is an unachievable myth. The technological evolution which is optimising the quality and availability of offshore internet access has been driven by companies such as MVG, with its game-changing NeptuLink system.

The NeptuLink solution, which will operate with equivalent success on all types and sizes of vessels and offshore installations, promises to deliver 4G, 100Mbps, continuous internet connectivity up to 20NM/37km out to sea. Fulfilling this pledge for the specific challenges posed by the offshore environment required extensive forethought and thorough live testing, as it meant having to not only neutralise potential breaks in signal caused by the rolling and pitching of vessels, but also having to allow for the ways in which radio wave propagation can be affected over the ever-changing sea surface.

The next-generation NeptuLink possesses strengthened mechanics to protect the unit from the potentially destructive mixture of spray, salt and humidity which is part and parcel of working conditions at sea. Meanwhile, the solution’s overall cost-effectiveness has been enhanced with dual-SIM functionality, meaning that users on international voyages can choose the most advantageous source of internet coverage to avoid being hit with hefty roaming charges.

An enlightening example of the NeptuLink solution’s capability in the field is provided by the 80m Abeille Bourbon high-seas salvage tug, chartered by the French Navy to carry out assistance, pollution remediation and salvage missions, predominantly in the busy Ushant shipping lane but also in other locations along the Atlantic coast. On call every day of the year, the Abeille Bourbon is equipped, like its sister Abeille salvage tugs, with NeptuLink. This ringing endorsement was the result of a successful testing phase conducted by the Bourbon shipping company, following which the firm’s procurement manager ordered a NeptuLink system for each vessel in the Abeille fleet. 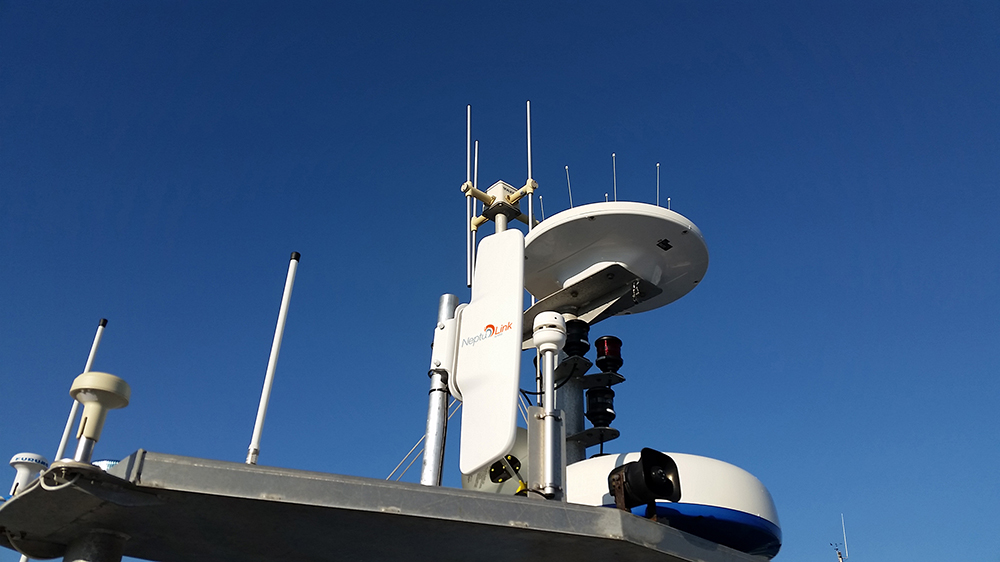 Straight away, the crew were impressed by the solution’s simplicity of set-up and deployment: ‘We didn’t [even]have to put the boat in the dock to install the system,’ remembers Thierry Choquet, the vessel’s commanding officer. In use, it also became instantly apparent that the powerful, high-speed 4G service enabled by NeptuLink was a vast improvement over the weak and slow 3G signal previously used on board the vessel for messaging purposes.

NeptuLink has also proved transformative in allowing the crew to upload photos and live video of their emergency missions over an internet link to the French Maritime Prefect, if requested to do so in exceptional circumstances. Installing the system on the boat’s exterior to avoid signal interference from the hull has further boosted the efficiency of the 4G antenna, connected by an ethernet cable to the Abeille Bourbon’s routers.

So well has the solution performed that the Abeille Bourbon has now been fitted with two NeptuLink systems. While the first box, linked to the computers of the commanding officer and mechanic as well as the access gateway computer, is devoted to work-related communications, the second has been funded by Bourbon’s work committee and is given over to enhancing the crew’s downtime, allowing them to surf the internet and send/receive private messages.

‘NeptuLink has made our work more simple and more efficient,’ comments chief officer Adrien Feltz, ‘and it has also given us a better quality of life. As we spend a third of our life at sea every year, having email and internet on board isn’t just useful, but makes life much more comfortable.’