Last week, for the first time, I was in Miami to attend the Miami International Boat Show. Why, you might ask, since the show is primarily a haven for all things having to do with recreational boating? Primarily — but not exclusively.

For example, Inventech Marine Solutions/Life Proof Boats brought one of its aluminum patrol boats for government, military, and all other professionals to see.

Three years ago, WorkBoat began putting together an outboard engine directory because more and more outboards were finding their way into military and commercial applications.

UK-based Cox Powertrain recently introduced its CXO300 diesel outboard to the market to take advantage of the trend. “The biggest rise in outboards is the convenience of access to the engine, should anything go wrong, meaning less downtime and disruption to operations,” David LeBlanc, director of sales and product development with Cox Powertrain dealer Innovative Diesel Technology, Houma, La., said in an interview late last year. “The CXO300 offers the same fuel saving benefits of an inboard engine so the economic advantages are not compromised. Also, with space on boats being more restrictive, having large inboard engines isn’t always convenient. There is also an increased interest in diesel outboards because diesel is more widely available. It is also safer to use and allows the mother craft the convenience of carrying a single fuel.” 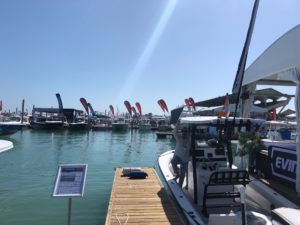 So far, we have published two directories and with a third due out in our upcoming April issue. Therefore, if I wanted to talk to more outboard engine manufacturers and distributors, the Miami International Boat Show was the place to be.

The show itself is massive. Not only are there multiple halls full of almost every marine vendor that exists and its products, but also there are docks outside housing dozens of boats of all sizes up to 65′ that runs more than two city blocks. Coming off the main dock are smaller (in length) docks running out to the channel leading into Biscayne Bay.

All of the outboard engine manufacturers were in the same area, which made my job easier, but I walked the whole show — inside and out — in the two days I was there. It was a lot to take in. Again, it was massive.

In a separate area from the engine manufacturers, Covington, La.-based Laborde Products had Oxe’s new 300-hp diesel outboard in its booth, and it was getting a lot of attention. The Swedish diesel outboard features a BMW engine. (The OXE300 will compete with the CXO300). OXE says the primary customers for the diesel 300-hp outboard are search and rescue operations, government and transportation owners and other marine applications with high-speed and high load demands. Those are all workboat applications.

To get from a number of different downtown locations to the boat show, one could cross Biscayne Bay by bridge and deal with the bumper-to-bumper traffic or use the show’s free ferry service. (Those ferries are workboats.)

The service I used took about 45 minutes, one-way, in 80° weather. It was a welcome change from drizzly, chilly New Orleans in February. Put it all together and it means that I plan to return to Miami for the boat show next year.