My dad, Nick L. Skansi, was born in 1930 on the waters of the Adriatic, then Yugoslavia, now Croatia. His father, Anton, was a wine merchant on the high seas. Back in those days, transportation by truck was not an option. Anton owned three sailing ships and traveled to grape farmers scattered around various islands near the Peljesac region of Croatia (wine country).

Anton, his crew, and my dad used hand pumps to get the bulk juice from the vineyards to large barrels onboard the vessels docked in the port. The barreled bulk juice was then delivered to the wine makers on the mainland. My friends often joked how my dad’s arms looked like Steve Garvey the baseball player.

My dad’s time in Yugoslavia was ended by World War II when he was 13 years old. He traveled at night on foot via the “underground” with a small group of boys from his hometown of Sumartin on the Island of Brac. His journey was to get to the opposite side of the island to catch a vessel to take them to the Allied Camp stationed on the island of Vis. 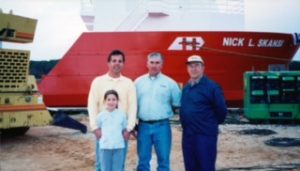 Launching and christening a vessel is a big day in a boat’s lifetime. (From right) is Nick L. Skansi, the shipbuilder Rusty Bosarge, David Skansi, and daughter Meg L. Skansi. Skansi Marine photo

The story goes the six boys were fed by people of the underground, slept during the day and walked at night (a five-day journey). My grandfather, through his connections, got my dad a job on a freight ship and out of Europe. My dad stayed (the ships were his home) on-board various ships working from the U.S. to South America and Cuba for the next seven years. Finally, one day in New Orleans, the sailor he was, traveling from port to port in the Western Hemisphere, got the courage to get on a pay phone and make contact with the United Benevolent Slovenian Society (a charitable organization to help Yugoslavs in the New Orleans area).

The initial call rang at my mother’s aunt’s house and soon thereafter my mom and dad were married. (Think about that happening in today’s world.)

My dad had no real academic education and no real amount of money. He started his married life working for his new father-in-law on a 32′ oyster boat. Most of the money my dad made while on the ships was sent back to his mom, sister, and younger brother back in Yugoslavia because earning a living in Yugoslavia after the war was impossible. This, in a nutshell, is why there are so many Croatians in America, New Zealand, and Australia.

One of my dad’s accomplishments that he was very proud of was putting his younger brother through medical school from the wages he earned while on the ships.

My dad continued to work hard at oyster fishing while at the same time working to get his U.S. citizenship. He finally was granted his citizenship. It was a big day. One month after receiving his citizenship he was drafted into the U.S. Navy and ordered to go to San Diego.

He completed his two-year draft term on the USS Essex off the coast of Korea and then got a job with his cousin who had a tuna fishing fleet in Gig Harbor, Wash. He worked one season to save up money and, with help from his new brother-in-law, bought his first oyster lugger back in Louisiana.

My dad ran a successful oyster fishing business in the brackish waters off Louisiana and Mississippi for the next 50 years. Besides his wife, two sons, and daughter, he reserved a lot of pride for his three oyster boats and, specifically, the Challenger.

One of my favorite stories about the Challenger, told by Nick Bezmalinovic, a local Croatian character with his boisterous voice, was, “When you step down into the engine room of the Challenger, you thought you were stepping into the Ritz Carlton — everything was perfectly placed and shining like new.”

In the mid-1990s a Bluefin tuna boom came through South Louisiana. Back then most people in Louisiana didn’t know bluefin tuna were migrating annually through the Gulf of Mexico. The Japanese had been fishing way offshore in the Gulf with freezer boats and bringing their catch back to Tokyo. My dad and his two sons had to get a piece of that. We bought a retired oilfield boat. Guess what we named it? Challenger II. Like most fads, the business did not last too long, but the experience was my way to get a foothold into the offshore oilfield boat business. My dad went back to his oyster business.

I got into the oilfield in late 1999. As you can tell by now, vessels with their names take a place in the family. I named my first offshore supply vessel after my mom, Helen T. Skansi, second after my daughter, Meg L Skansi, third after my same daughter Meg, fourth after my father, and fifth after my favorite uncle who lent my dad the money to get into the oyster business way back when.

The Nick L. Skansi was delivered to Skansi Marine in 2002. She worked in the oilfield doing various types of jobs in the Gulf of Mexico. Because of her design, she was often sought after to do survey, seismic, ROV, and environmental exploration through 2014.

My dad passed away in 2009. One of my favorite stories about the Nick L. Skansi was when his grandson, my nephew, while enrolled in Texas A&M chasing a degree in marine transportation and on his first training voyage offshore in the Galveston ship channel, came broadside to the Nick L. Skansi. The Gulf is big, and the chances of this happening (two ships passing in the night) was minimal. I believe my dad wanted his grandson to know — I got your back.

Since 2015, work in the oilfield has been a bust. The Nick, as they say, has been hugging the pilings since Christmas 2014. In 2019 Skansi Marine took steps to get out of the doldrums of the oilfield and test the waters on the East Coast. Although I knew it would happen, I never thought in my lifetime a good plan in business would be to leave fossil fuels and join the environmentally friendly wind industry.

A twist that we believe has never been done before is that we can put in and take out the transducers without drydocking the vessel or without the use of a moon pool (a significant cost savings). As proof of the concept, we rented a vessel last year and ran the R2Sonic equipment from a pole installed on the vessel. We proved that we could survey and deliver a map of a 10-mile stretch of the Mississippi River, all within an eight-hour workday.

Our vision for the Nick as applied to this windfarm work is similar in efficiency and deliverables. Additionally, with five-plus years cold stacked, we have renewed all her systems (mechanical and electrical) and blasted and painted her from mast pole to keel, including all the machinery spaces. We can now proudly say she has been Nick Skansi’d! In south Louisiana that comment is widely known by the Croatian oystermen, “to maintain your vessel as close to perfect as one can make it.”

My dad traveled and worked in all the major oceans around the world. When I think of all the oceans he worked in his lifetime, it tires me just thinking about it. Through all my school years and one year after college, we worked side by side. It is among my most pleasurable memories. I never once heard my dad complain about work.

And, now, Skansi Marine has outfitted and renewed the Nick L. Skansi to accomplish this next generation of survey work or whatever comes its way on the U.S. east coast.

Dad, rest in peace, we’ve got the wheel.